Among social networks in Vietnam, Facebook is dominant at present.  According to Wearesocial, Vietnam is among Facebook’s top 10 countries by users (ranked 7th) and  people spend more than two hours each day on average on the social media network. The question is “why do Vietnamese people like using Facebook?” 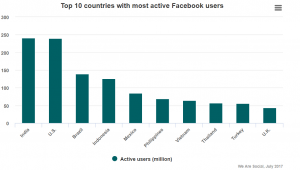 It is hard to find a good alternative SNS to compete Facebook in Vietnam at present since the glory of Yahoo was shut down. Although Party officials has contemplated a local alternative for years, the social media giant is still here. Unlike China, Vietnamese government lacks financial wherewithal and leverage over big Western firms like Facebook or Google to simply block them. According to an article “Why Vietnam can’t hold back Facebook” on Vnexpress, even former Prime Minister Nguyen Tan Dung admitted that the social network he instructed the Central Youth Union to create in 2013 failed to get off the ground. Two years after the project failed to materialize, he acknowledged at a cabinet meeting that banning Facebook would be impossible. Even if the local social network were launched, it would be difficult to confirm that Vietnamese people choose to use it or keep going with Facebook when they get used to using this giant social network since 2010s. They will compare the features of Facebook with the local SNS. If there are not many outstanding features added to local SNS, people will find no reason for abandoning Facebook. For instance, more and more people are using Zalo, but its features are not diverse and attractive enough to defeat Facebook at this moment.

Moreover, “Vietnam’s young and growing population, combined with rising disposable income will support an increase in smartphone usage and technology services in the coming years, helping to further fuel the popularity of social media platforms, such as Facebook”, Alice Mummery, the Asia analyst at the Economist Intelligence Unit, said. Facebook entered Vietnam at the time of the boom in population and Internet. This advantage explains the popularity of Facebook in the country with 90 millions people who enjoy benefits from Internet and Technology service. Looking at the mobile app rankings, it is clear to see that Facebook is the first choice for Vietnam’s young people (age: 18-34) who have actively reached to Internet quickly for several purposes (connecting with friends, learning, shopping, etc) whenever and wherever they want. 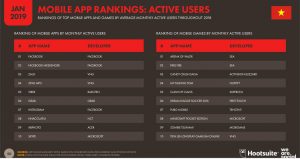 In fact, Vietnamese people are using Facebook for not only updating new information quickly and keeping contacting with friends but also shopping. As many as 70% of Vietnamese people use chat apps Facebook Messenger for online shopping, according to a market research firm mentioned in  an article of Hanoitimes. In addition to updating news from friends, the people can quickly search product images, then contact the shop via messenger and receive nearly immediately reply, which helps them make decision fast and understand partially about the shops which they are interested in. This is the thing that many e-commerce companies in Vietnam cannot provide: “Quick reply”.

Particularly, looking at the result of Vinaresearch, the category that people buy  most via Facebook/Zalo are Fashion including Clothes and Accessories (Facebook 70.5%, Zalo 64.2%), followed by Cosmetics (30%),  junk food (nearly 30%) then Gifts/Books, Electrical goods, etc and women purchase goods on Facebook more than men. The main payment method when shopping on Facebook was COD shipment (approximately 93.3%), while the second position was bank transfer (39%). The reason why COD ship and paying directly is usually chosen by consumers is to avoid cheaters on Facebook.

In conclusion, many Vietnamese people are using Facebook every day as a habit. It will be difficult to find a replacement for this big social network. However, as the government will set to tighten clamps on social network with their cybersecurity law, it is hard to conclude that the development of Facebook in Vietnam will last for long time in the future.