With approximately 100 million registered accounts, Zalo is becoming a popular OTT application (a term used to refer to content providers that distribute streaming media as standalone product directly to viewers over the Internet) in Vietnam. It is considered a potential tool for enterprises to improve business and/or brands. However, despite the fact that Zalo was born in 2012 while Facebook entered Vietnam for three years, this may be a disadvantage for Zalo to compete with Facebook. However, when Vietnamese people started being interested in OTT service and other foreign OTT applications such as Kakaotalk and Line have not invested much in Vietnam market or Wechat was kicked out because of political issues, Zalo has risen up quickly as a good Made-in-Vietnam application for Vietnamese people. Let see how Vietnamese people use Zalo and Facebook Messenger.

Facebook Messenger and Zalo are popular regardless of users’ ages. The Vietnamese young people have less ration of using SMS, Skype, Viber and others.

When learning more about the behavior of using Zalo and Facebook Messenger for communication, it can be clearly observed that Facebook Messenger is more commonly used in the community of friends. This trend can be explained by the current large Facebook user community. On the other hand, Zalo is more popular in exchanging with boyfriends / girlfriends/other friends as it has more private environment than Faceobook. In addition, Zalo is also popularly used for business purposes thanks to the ability to send messages and HD images effectively. In fact, many companies are connecting with customers via Zalo to provide customer service (advice, consulting, following customers’ product experience, etc) as it is easy to add friend when knowing customers’ phone numbers. 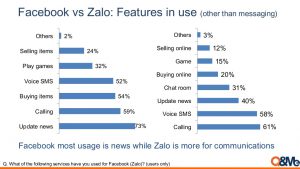 Access equipment is one of the factors that make the difference between choosing to use the application. Specifically, the Zalo messaging application is mainly used on smartphone devices despite the fact that it also has PC versions, while Facebook Messenger is commonly used on both smartphone and computer devices. This is completely understandable when Facebook Messenger is the widely used application for exchanging messages with multiple audience groups (particularly on PC, when it is a part of Facebook), so it needs interaction from more devices.

The majority of respondents selected Facebook Messenger for application reasons that helped connect many friends, many features and lots of information. It can be said that when you spend a lot of time using Facebook Messenger, you can connect with more people. Meanwhile, Zalo is much loved by Vietnamese people because of how easy it is to use. When comparing the “easy to use” ratio and many other messaging features between Zalo and Facebook Messenger, Zalo prevails. In addition, Zalo is highly appreciated by the image transmission feature.

In summary, Facebook Messenger is still dominating in OTT market. However, Zalo is growing fast as very potential competitor. Obviously, it will take long time and long journey for Zalo to become the best application as Kakaotalk in Korea or Wechat in China, however, it is suggested to be a good channel (with 100 million registered accounts) for companies to increase their business and/or brands because of some good points. Specifically, product advertising has many advantages such as:

-Target is right for your potential audience through your age, gender, dispatch system or around your business.

-Costs are only counted when customers “click” on the ad

-Offer different auction packages to help you save advertising costs

-Zalo minimizes the number of “unreal” customers when users have to register with their phone number.

Moreover, although both applications have group chat features, possibly between colleagues, close friends or family, Zalo has raised to new level with chat rooms. The chat room is like a big chat group where you can chat with a multitude of people who are mostly unknown. Chat rooms are divided into many areas, can be divided by regions, or interests, lifestyle, trends.

Another interesting feature in Zalo that Messenger doesn’t have is “Find around here”. This is the feature that clearly shows the goal of becoming a social network in OTT application when you can make friends, chat with anyone who uses Zalo and search within a radius of a few meters, a few dozen meters to several hundred meters around you.